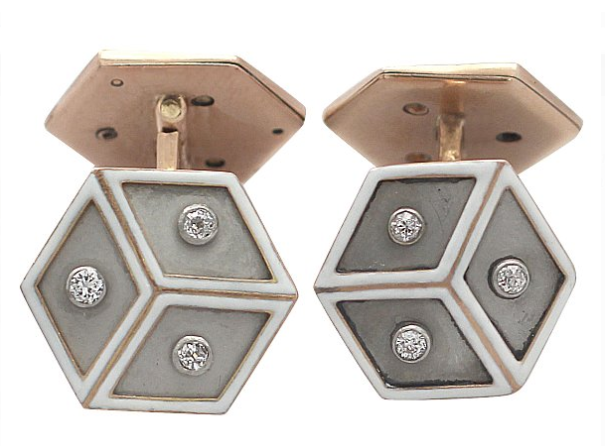 Today there are less boundaries defining what jewellery is a man’s and what jewellery is a woman’s, than in recent history. For example, last year we saw the popularity of the ‘male choker’, which was previously seen to have been an item dedicated to ladies’ jewellery.

However, like everything that has a history attached to it, there is also tradition in jewellery, and traditionally pieces like signet rings, tie clips and cufflinks have been worn by men.

With the help of AC Silver, stockists of antique cigar cases and jewellery, we are going to take you through a guide to one of the most popular male jewellery items of all time, cufflinks.

Cufflinks are essentially an alternative for the buttons on cuffs of shirts. Many shirts, especially ones made for more formal occasions will be made with no buttons on the cuffs, and instead, have two small holes to allow for cufflinks. Cufflinks offer more of a contrast than just having buttons on a shirt and also allow the wearer to show off a bit more of their own personality and personal style.

Although there has been evidence of the first cufflinks dating back as far as the 15th century, they did not become popular until the end of the 18th century.

As we moved into the 19th century, and more men were progressing to the middle classes, they began to wear a more conventional wardrobe: a suit by day and a dinner jacket of tailcoat in the evening. By the middle of the 19th century cufflinks had become very popular and every man in the middle and upper classes were wearing cufflinks. Alongside the industrial revolution, this meant that they could be mass produced and available within every price range.

During the early to mid-20 th Century, more designers experimented with different styles and designs of cufflinks. As more cufflinks were being worn than ever before. They started becoming available in many different materials and colours, using precious stones as well as semi-precious stones and cheaper simulants. Coloured enamel cufflinks featuring intricate often geometric designs were very popular at this time.

On the other hand, this was also around the time that a new sportier style of shirt became available, with non starched cuffs, which could be fastened with simple buttons.

As the world’s economy started to recover from the shortages that related to the Second World War, leading into the 1950s, gentlemen of the period liked to adorn themselves in a range of different accessories. Such items included cigarette cases, lighters, tie accessories, wristwatches, and signet rings and of course this included an extensive assortment of cufflinks.

During the 1970s the popularity of cufflinks took a dip as many of the middle class generation (the Woodstock generation) turned toward a more casual style of fashion. This meant most shirts were made with buttons on the cuffs, rather than holes left for cufflinks. Many heirlooms where also made into earrings.

It was then in the 1980s that cufflinks started to make a comeback in traditional male dress.

This has continued into today, with more types and styles of cufflinks available than eve before. As well as a new found style of cufflinks being used by, and manufactured for women, as well.

If you have ever gone out to buy a pair of cufflinks, either for yourself or as a gift for someone, you will have noticed that there are many different styles and types to choose from.

Cufflinks can be made from a variety of materials, and cufflinks made from gold or platinum can be purchased, both with gemstones and without. You will also find there are options in less expensive metals, such as silver or titanium.

You may also find cufflinks made from knotted silk or soft cord, which are the most affordable choice, however they are easily the least durable; this style is mainly preferred as a more casual choice.

Bullet back cufflinks are one of the most common types of cufflink you will come across. This is due to their durability and how easy they are to use. Rather than having a solid post, they have a hollow frame with a small bar or tube of metal that sits inside the frame. The tube can then rotate at a 90-degree angle, allowing the cufflinks to lock – leaving the hollow frame as the post.

Due to their design, bullet back cufflinks only have one decorative face while the back is just the simple tube of metal.

Whale back cufflinks have a flat head with a solid straight post. There is a “whale tail” at the end that flips completely flat against the post. Like the bullet back cufflinks, the whale back cufflinks are very easy to use and very durable, this is what makes them a popular choice for most men.

Other Types of Cufflinks Include

Other types of cufflinks include chain link cufflinks, as they have two decorative faces usually identical and they are connected with a short length of chain. They are a looser fitting than other fastenings available and are the most traditionally style of cufflinks.

There are variations on the chain link cufflinks where a small thin rod of metal is used with the two faces attached loosely at the ends attached with jump rings.

Ball Return cufflinks have an arched post with a small, heavy ball of metal on one end and the decorative face on the other. They provide a slightly looser fastening than hinged cufflinks, but a slightly tighter one than Chain Link Cufflinks. They can be an expensive choice if they are made from precious metals, due to the size and weight of the ball, adding to the material cost of the item. The ball can sometimes be decorated with a small symbol, or it can be left plain.

Stud or button back cufflinks have no moving parts, like many of the other styles, and instead have a large decorative face attached to a small solid post with a smaller head or backing on the inside.

They are put into place by tilting the smaller head and working it through the button holes, once in they tend to be secure, and as there are no moving parts that could possibly wear over time, they are a durable option.

Dual-action cufflinks are a contemporary style of cufflink that works like a clip or the fastening of a wristwatch. The cufflink has a hinge in the middle that allows them to slip into the buttonholes, and clips shut to hold the cuff together.

How to Wear Cufflinks

There are two ways that you can wear cufflinks, either having “kissing cuffs” or “barrelled cuffs”.

1. Make sure that the bar of the cufflink (if it has one) is pointing straight down to make it

2. Pinch the two cuffs when the holes are next to each other.

3. Simply slip the cufflink into the two holes with the decorative face pointing up.

4. Twist the small bar back into the horizontal position (if there is one) to lock the
ufflinks and stop them from slipping out.

The exact same technique works with single cuffs or double (French) cuffs as long as you line up the hole correctly.

The second technique would be the more casual option, as it also makes the cuffs appear thinner, giving the shirt a sportier look. The main difference is rather than pinching the cuffs together to align the holes. Place one cuff on top of the other and line the hole up (so that it would fasten as it would if there were a button attached).

This is more of a contemporary way to wear cufflinks, but can look great with slimmer fitting shirts. Personally, we wouldn’t recommend this way for fastening for double cuffs, as it can make them slightly bulky, however, the great thing about style is it’s completely up to you with no right or wrong way to do something!

When to wear Cufflinks

Although cufflinks are often seen as more of a formal piece of jewellery, this doesn’t have to stop you from wearing them every day if this is what you would like to do! More men are becoming style conscious, and enjoy showing off their personal tastes. When it comes to fashion, cufflinks are a great way to do this! With so many styles and colours available, you can change the look of a shirt or entire outfit very easily.

For everyday use we would recommend a plain style of cufflink as they sit on your sleeves all day, the last thing you would want to do is accidently hit your wrist off your desk as you’re typing and knock a small gemstone loose from a pave setting!

However, we believe there is always a time and a place for showing off the best of what you’ve got, such as birthdays, family or office parties, or anytime that calls for a more formal attire is the perfect occasion to show off your most dazzling cufflinks.

Of course, there are no set rules to when the right time to wear a certain style of cufflink is, so it really is up to you! There are even many novelty themed cufflinks around if you would like to show off a particular interest in something, like these football themed cufflinks.

With so many different styles and choices out there it is easy to see why the fashion of wearing cufflinks has really stood the test of time! Whether you are looking for yourself or for a gift, we have no doubt that you will find the perfect pair of cufflinks with all of the choices available!

This traditionally male fashion accessory can now be worn by anyone for any occasion, so why not really show off your personal style!