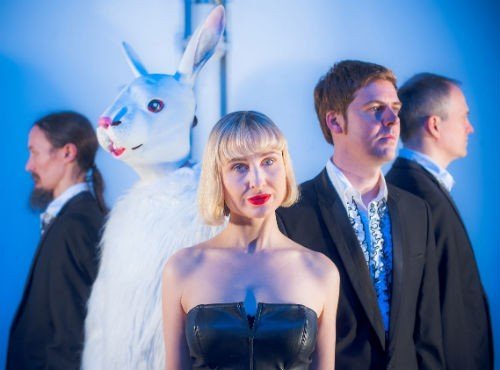 Glasgow based art-pop four-piece A Band Called Quinn – Louise Quinn, Bal Cooke, Robert Henderson, Steven Westwater – have recently been working on finishing the soundtrack to a theatre performance and a live multimedia show called Biding Time (remix), which tells one woman’s story of being signed to a major record label.

The play is focused around front woman Louise Quinn and explores the role of women, democracy and social change. Biding Time (remix) takes the protagonist Thyme’s name & archetype of aspiring starlet from a shared story and builds a completely new show. ‘Forget About It’ (released on 27th April) is the the lead track from the soundtrack.


How did A Band Called Quinn form?

Bal & myself had been through the whole major label thing with our previous band Hardbody. We started playing with a new band called Quinn. After Madonna posted one of our tracks on her American pie Blog, a musician in the states going by the name of Quinn forced us to change our name to A Band Called…

Can you tell us 5 things we should know about your multimedia show Biding Time (remix)?

1. It’s based on a true story.
2. It’s like a gig meets a play meets a film.
3. It’s got a giant rabbit in it.
4. The audience wear silent disco headsets.
5. It’s been described as Blondie meets cutting edge performance company Forced Entertainment. 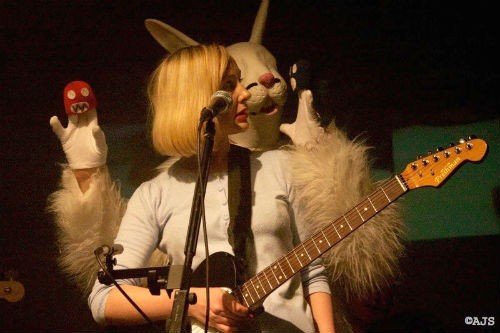 Can you describe the sound of ‘Forget About It’ in a few words?

Could you briefly describe the music-making process for this record?

The songs tell a story.

Having to toughen up.

Who would you like to be as famous as?

Tell us a bit about your early days, and how they differ from now.

What was the last show you played? What did you think of it?

The last show we played was a fund raiser for the victims of The Clutha Vaults tragedy. It was good to be able to help in some way.

Prijepolje in Serbia; a beautiful place with beautiful kind hearted people who have lived through terrible trials but were so generous & appreciative when we played there.