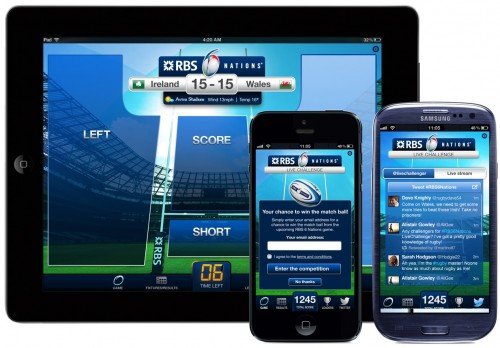 Rugby fans that play the RBS 6 Nations Live Challenge app will have the exclusive opportunity to take home the match ball from every game.

Now in its second year, the RBS 6 Nations Live Challenge app responds to the live match action, allowing fans to have their say in-play on what will happen ahead of key moments in each game and enabling players to predict the result of penalties and guess where the kick will end up in conversions.

Trivia questions relevant to the match in-play also test rugby fans during the game. And with the new 2013 version allowing participants to win the match ball, the stakes have never been higher.

The updated RBS 6 Nations Live Challenge app will also feature new elements including an integrated Twitter function permitting players to tweet from within the app while also providing the collated views of rugby experts.

The app is available to download for free for iPhone, iPad and Android.
rbs6nationslivechallenge.com