Check the boys from 3OH!3 Tomorrow Night Friday 3rd June at Belfast Mandela Hall. 3OH!3 doesn’t like to brag. Sean Foreman and Nathaniel ‘Nat’ Motte say that making their loud, distorted, electronic-pop music is not about the trophies and notoriety. 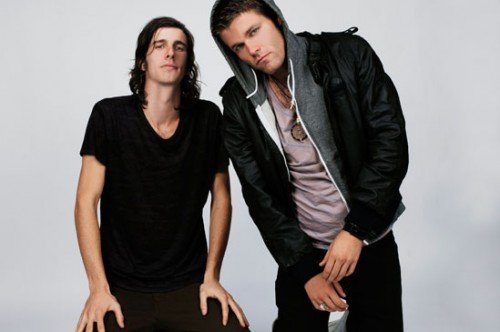 No, forming 3OH!3 (named after the duo’s area code in Boulder, Colorado) was always about something larger than themselves. It was and remains about being FUN!3OH!3 hates to brag, but if they had to they would tell you that they were nominated for “Best New Artist” alongside Lady Gaga, Kid Cudi, and Drake, at the 2009 Video Music Awards.

Though they didn’t bring home the moon man, Nat and Sean had just as much fun performing “Don’t Trust Me” in Radio City’s hallowed halls.

Nat was actually happy 3OH!3 wasn’t announced best new artist as he claims he would have peed his pants, having not been able to find a bathroom all night. “Drinks impair the ol’ judgment,” he says.

We know 3OH!3 would never say this, but they are one of the best live acts in the business.

Their dedication to putting on an epic and fun show every night was rewarded by a nomination for the 2009 MTV Woodies’ Performance Award alongside artists like Green Day, Animal Collective and Phoenix.

With their non-stop touring schedule, it must have been a real relief to retreat to their mountain sanctuary in Breckenridge in January to record their next album. In a snowy cabin, far above the world, Sean and Nat went a little crazy, writing as many as two new songs a day for 14 days. “We had all these songs built up over the past couple years,” Sean says, “and it was like a mental vomit of all the stuff we had been thinking.”

Back in the studio with the usual suspects Matt Squire and Benny Blanco, 3OH!3 took all they had learned from touring and experience and put it to use. “There are some crazy sounds on this record,” Nat says, “It sounds like robots making love.” Nothing says love like their first single off the record, “My First Kiss” featuring Ke$ha. “It was like our first kiss with Ke$ha,” Nat says, “It was the first time we met her and she definitely used tongue.” Within a few hours of being released on iTunes, “My First Kiss” jumped to the no. 2 on the overall song chart.

On the road again, 3OH!3 is testing out the new tracks and making more friends. “We’ve played some of the new songs without a single fan knowing the lyrics,” says Nat, “And people are going fucking BANANAS. It’s a great sign!”

There are many great signs for 3OH!3 as they take their journey on their own street of gold.

Nat, as a writer and producer, has been working with other artists. Sean is keeping busy with his own cowrites—including Ke$ha’s platinum selling “Blah Blah Blah”—and as a result was named the #9 Hit Songwriter in the UK by Music Week. The future is looking bright for these two Boulder boys.
www.3oh3music.com
3OH!3
plus special guests
Fri 3rd June 2011
Mandela Hall, Belfast
Tickets £16.00 + bk fee from Ticketmaster and Queens Student Union.
+ 14s show.Tickets on sale NOW