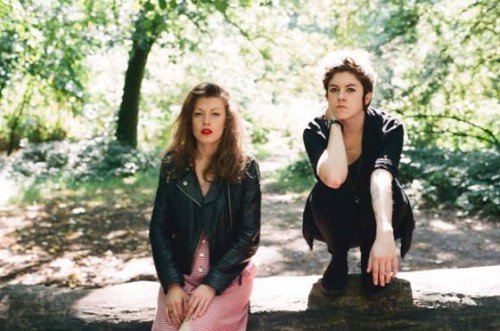 A perilous ride into a foreboding, enchanting dreamscape, London-based sisters Colette and Hannah Thurlow -otherwise known as 2:54- have delivered one of the most thrilling releases of the year, in the form of debut 4-track EP, ‘Scarlet’.

Fans of their limited seven-inch-only single, ‘On a Wire’ (which sold out instantly when released on talked-up indie label House Anxiety this spring) will have expectations incinerated within the first spin of ‘Scarlet’, their first release on Fiction Records. On A Wire 7″ by 2:54 Band
The duo make a vertiginous leap into a whole new world, expanding their vast, darkly cinematic sound, and tapping a bloodline -spanning all manner stoner-rock and punk and deities- in vital new form that instantly places them alongside the finest atmospheric pop experiments of Tomorrow. Proceedings are given an added thrust this time with the arrival of luminaries such as mixer Alan Moulder (Smashing Pumpkins, Nine Inch Nails) and Mercury-winning producer Rob Ellis (PJ Harvey, Nick Cave).