1glu & Hartly announce their return to Belfast after making a monster impression on their debut European tour last winter.

The Californian group return to The Spring & Airbrake on Wednesday 4th March, a show which is guaranteed to have the crowd clapping along to their chart topping single In This City amongst others. 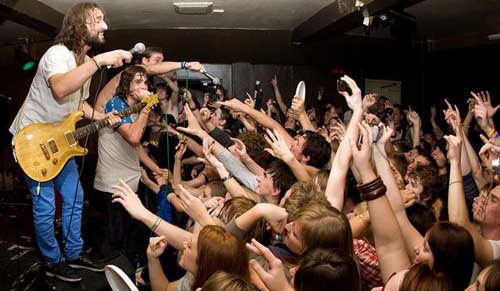 We’re f**king widescreen, says Jarvis Anderson, lead vocalist and producer for Iglu & Hartly. The album is like that scene in Wizard of Oz when the picture flips from black and white into colour

The music oozes angst, growth, separation, renewal, revival and hope. It urges self- confidence, trust in others, belief and survival. This is not just pop music as a one-night stand. This is pop music you marry. Feel good, but take it home with you.

â€˜We want people to listen to our records, be inspired, look inside themselves and work out how they can dominate the world in their own unique way. Says Jarvis. We’re about smashing down barriers.

The group met at the University of Colorado in Boulder. Jarvis Anderson, Sam Martin (Vocals, keys) and Simon Kratz (guitar). These three began making music that, ultimately, made them. Unable to contain the energy, and unwilling to wait for their diplomas, the boys quit school and moved to the electric neighborhood of Echo Park, California where they began knocking on club doors and asking to play shows.

While enduring a circuit in the glitter and grime of seedy Hollywood night clubs, the band was simultaneously embraced in the South Bay of Los Angeles, a beach community with a strong punk rock heritage, home to legendary bands such as Black Flag, The Descendents, Circle Jerks and Pennywise. Leave your Malibu sunshine daydream at the door¦

Shortly after moving to Los Angeles, Luis Rosiles flew from Jarvis’ hometown of Chicago to join the band as their drummer, and LA local Michael Bucher joined as bassist.

With over 200 shows under their belt in Los Angeles, Iglu & Hartly has gelled into a force to be reckoned with on and off stage.

“And I found that round here, that I won’t disappear, I’ve got nothing to fear.”

Iglu & Hartly recently joined forces with Mercury Records to bring its debut release, “& Then Boom” to the masses, where it belongs. The September 22 release date marks the beginning of a band-centered, worldwide marketing effort, including touring and promo activities in every major market in the world. Eleven songs, recorded in the living room of the Echo Park house they have lived in since moving to Los Angeles. No filler.

Welcome to the world of Iglu & Hartly. A world of hope driven by heavy synth. A world soaked in beer and sweat, borne from heart and soul. Welcome to the movement of kids worldwide who have heard the word, who believe, who live like us. Uncompromising, undeniable, uncontrollable, unstoppable.