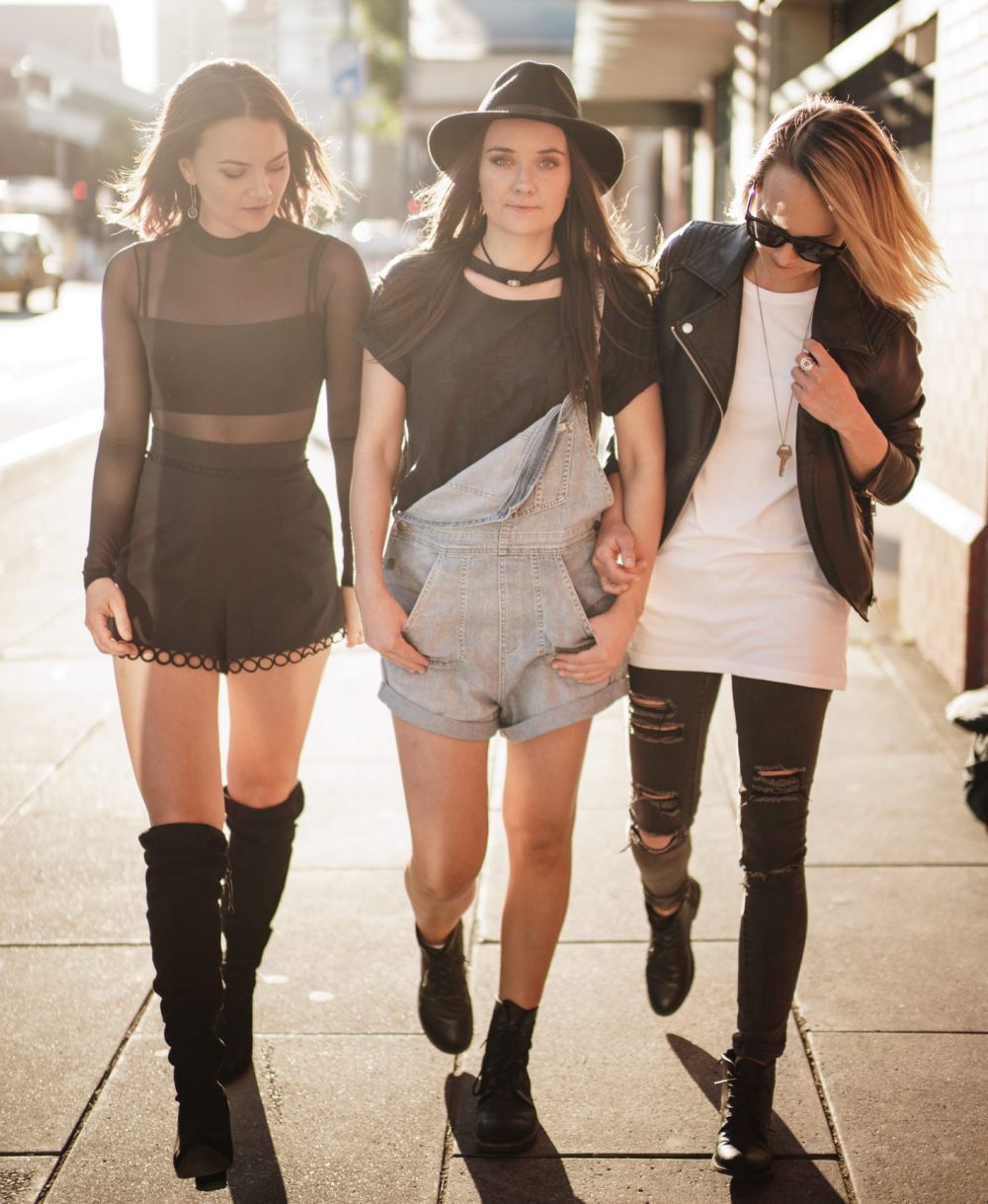 Just before supporting Little Mix on their new UK stadium tour this July, exciting Australian trio Germein – Georgia (guitar, keys), Ella (electric cello, bass) and Clara Germein (drums) – present their convincing and sweetly catchy pop pearl, called ‘Talking’ and open up about their recent live set at the Isle of Wight festival; the heart-warming experience playing for the orphans and sick children at the Agent Orange Rehabilitation Centre in Vietnam…and loving performing on a swimming pool on National TV in Germany.

Hello Germein please introduce yourself to our readers:

Tell us about your new single ‘Talking’?

Georgia | We decided we wanted to start making music on our own terms, and so tried recording and producing ‘Talking’ ourselves in our home studio in the Adelaide Hills, South Australia. When we hit play, we knew it was the musical vision we’ve had for ourselves finally coming to life. ‘Talking’ takes on a bit of a darker theme, with edgy guitar hits, pumping drums and bass, and a soaring break out chorus showcasing our three-part harmonies. ‘Talking’ we hope can relate to people facing all different types of challenges. Whether it be feeling like you can’t express yourself through communication in a break up, losing a loved one, fighting with a friend, or even feeling like you don’t have the right to talk…

Ella | There’s a line in the song “this silence is killing us” which basically talks about bottling up the fear, anger and frustration to the point of it feeling like its destroying you. There is a cool build up in this part of the song which sort of reflects that building up and exploding feeling, like that feeling when you stand on the edge of a cliff and just scream out releasing all the emotions and after you feel ten times better… 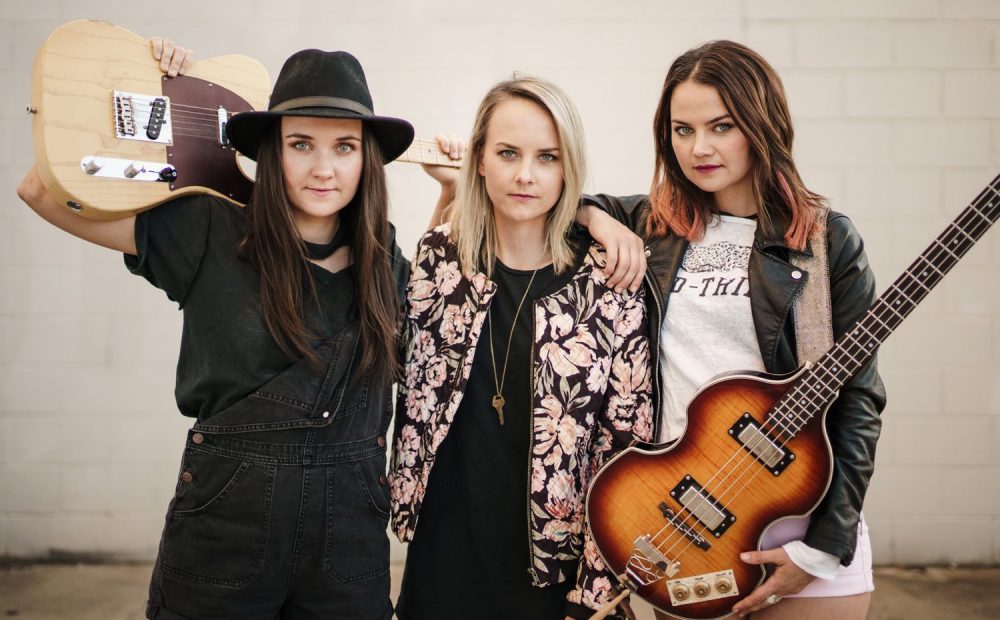 Clara | Queen. Their harmonies are out of this world, their music is infectious, and their energy would be incredible to be amongst…

You’ve just played the Isle of Wight festival. How was it? and did you catch any other band whilst you were there? Any highlights?

Ella | Isle of Wight was amazing as always. We were stoked to be asked back to play for the 50th Anniversary. The whole weekend could only be described as magical – the weather and sunset each night was just stunning to say the least, and the line up was just WOW! We caught so many fantastic artists but a few highlights would have to be The Script on Friday night – the music was awesome and the vibe was incredible to be part of. Seeing Van Morrison play live on Sunday night was unreal too, because growing up our Dad had his music playing around the house ALL the time…

You’re supporting Little Mix soon, what is a Germein live set like?

Clara | Our live sets are high energy, upbeat, and loads of fun. There are shredded guitar solos from Georgia, pumping bass lines from Ella, and I like to hit the drums hard – plus our vocal harmonies are a big part of our show. We’ll be playing a bunch of brand new original songs, including our single we just released ‘Talking’ which is a highlight to perform. I’m up the back on the drums so I like to leave the dancing to Ella and Georgia up front haha…

Georgia | There as sooo many! Of course we love the Isle of Wight and have played for the past 4 years now, and we opened for Little Mix for 2 shows last year which was unreal (now we’re kind of addicted to playing to super big crowds) so are beyond excited to be opening for them again this year! Saying that, we love playing intimate shows as well – one that comes to mind was playing for the orphans and sick children at the Agent Orange Rehabilitation Centre in Vietnam. It was such a heart-warming experience. Also performing on a swimming pool on National TV in Germany was a lot of fun. We’re super lucky we have had such a variety of amazing shows and tours…

You’re all sisters, do you think that mean there’s more or less arguing than a normal non sibling band…

Ella | Mmmm probably more because we’re not afraid to get things off our chest as much, although there’s definitely less tension after an argument as we tend to get over things pretty quickly. We all have each others backs at the end of the day and just want the best for each other, but of course when you’re around the same people 24/7 things can get a bit stuffy at times haha! But we know each other so well and have grown up together so we’re pretty used to each others company!

Georgia | John Mayer – Where the Light is Live in Los Angeles. I just love everything about a live album, and John Mayer’s songs and musicianship is just incredible.

Ella | Kasey Musgraves – Golden Hour. Im obsessed with this new album of hers, I dont know what it is but its just so beautiful the way its been written and musically created. I just love it.

Clara | The McClymonts – Endless. We do a lot of driving on tour and it’s great driving music. The songs are catchy and feel good too.

Georgia | ‘At the moment we’re pretty focused on smashing out the best show we can on the Little Mix Tour. We’ll be in the UK for a few more months, with some shows lined up in Europe as well, which should be fun! We’ll head back home for the Aussie Summer later in the year but are planning to be based on this side of the world from early next year for plenty more music adventures! We’ve been working on some new music too which we hope will be out real soon…